If you believe that fingerprints are a sure-fire way to verify an individual's identity, think again.

As far back as the early 1930s, infamous bank robber John Dillinger altered his fingerprints by applying acid to his fingertips. More recently, three people were charged in federal court in 2010 with conspiring to mutilate fingerprints to conceal illegal aliens from detection. 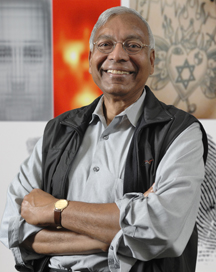 The widespread use of fingerprint recognition systems today - at border crossings and during screenings for security access or employment background checks - has prompted a growing number of individuals to disfigure or surgically change their fingerprints so they can mask their identities.

"Government agencies worldwide encounter individuals who have gone to extreme measures to alter their fingerprints to avoid being identified by Automated Fingerprint Identification Systems (AFIS)," says Anil Jain, University Distinguished Professor of computer science and engineering at Michigan State University and an internationally recognized leader in the area of biometrics and pattern recognition research.

According to Jain, some of the common methods that have been observed for altering fingerprints include burning the fingertip, applying acid or a chemical, or making an incision along the center of the finger in an attempt to alter the fingerprint pattern.

"We have developed an algorithm capable of automatically looking at the fingerprint image and determining whether the pattern is "unusual" or "normal." If it is "unusual," then it is flagged as a potential altered fingerprint and the suspect's fingers will be manually examined for signs of alteration," says Jain. "Of course, it is not possible for us to determine whether the observed unusual fingerprint pattern was due to an injury to the finger or due to intentional mutilation of the fingerprint," Jain adds. 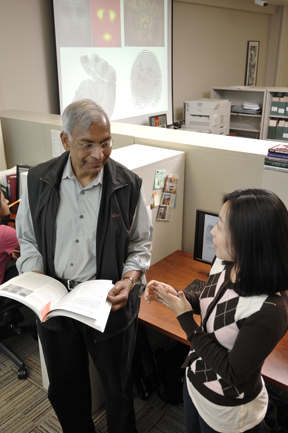 The algorithm must be extremely fast because state-of-the-art AFIS can process fingerprints at the rate of about 1 million matches per second. Therefore, he explains, "the feature extraction and decision rule used to automatically detect altered fingerprints must be simple, since this will be at the front end of the fingerprint matching system."  The altered fingerprint detector also must be capable of being easily integrated into any AFIS.

Jain's collaborators on the technology include Soweon Yoon (in photo at right), a computer science and engineering doctoral student at MSU, and Jianjiang Feng, an assistant professor in the Department of Automation at Tsinghua University, Beijing, China, who was formerly a postdoctoral fellow at MSU.

In their research, the team utilized a database of a few thousand images of altered fingerprints that were provided by various law enforcement agencies. The FBI's Integrated Automated Fingerprint Identification System (IAFIS) and the Department of Homeland Security's US-VISIT maintain two of the largest repositories of fingerprint databases in the world, containing tens of millions of subjects in each. Both of these agencies, as well as other law enforcement and border crossing agencies around the world, will benefit from this new technology.

The technology resulting from Jain's research was recently licensed to Morpho, part of the Safran group, one of the world's leading suppliers of identification and detection solutions.

"This transfer is the most recent development of our long and fruitful history of scientific collaboration with MSU," said Jean-Christophe Fondeur, vice president of research and technology director of Morpho's biometrics department. "We deeply appreciate Professor Jain's commitment to the advancement of biometrics, and we are very happy to support his research."

MSU Technologies, MSU's technology transfer and commercialization office, facilitated the licensing of the software to Morpho.

Previously, Morpho licensed tattoo-matching software developed by Jain. That technology uses features such as tattoo color, shape, and texture to compute the similarity between images to find the images in the database that are the most similar to a query tattoo.

The next step for Jain's research team is to develop technology with the capability to match an altered fingerprint with the original fingerprint.

Jain's research to further improve this technology is being funded by the FBI Biometric Center of Excellence.

To learn more about Jain's work, go to biometrics.cse.msu.edu.