Engineers Without Borders - Get Involved 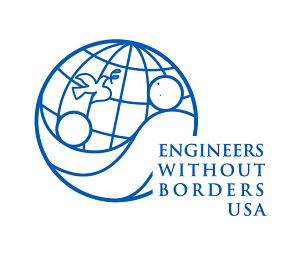 ll majors. Whether the task is in El Salvador, East Lansing, or anywhere else around the world, we aim to not only deliver successful solutions to environmental problems, but also to provide an education on what was accomplished. At MSU we understand how important a good education is and are especially aware of how privileged we are to receive it. It is a great honor of ours to share this privilege with the world and welcome anyone who wishes to help our cause.

One of the biggest challenges society faces is finding clean and reliable sources of drinking water. In Tanzania, a country located on the eastern coast of Africa, access to clean, safe water is a major concern in rural areas due to limited resources and inadequate sanitation, leading to many health, environmental, and socio-economic problems. In order to meet the needs of a rapidly growing nation, Salvatorian Sisters are in the process of constructing a new primary school building outside the city of Dar es Salaam in Buyuni, Tanzania. After being connected with The Sisters, the student chapter of Engineers Without Borders at Michigan State University designed and implemented the first phase of a rainwater harvesting system for this school. This system includes gutters, downspouts, first flush systems, tanks, and foundations. MSU EWB looks forward to continuing working with the community in the future!

Getting involved in EWB-MSU is as simple as attending our bi-weekly meetings. Visit the Website

For more information about Engineers Without Borders please contact the EWB Executive Board: 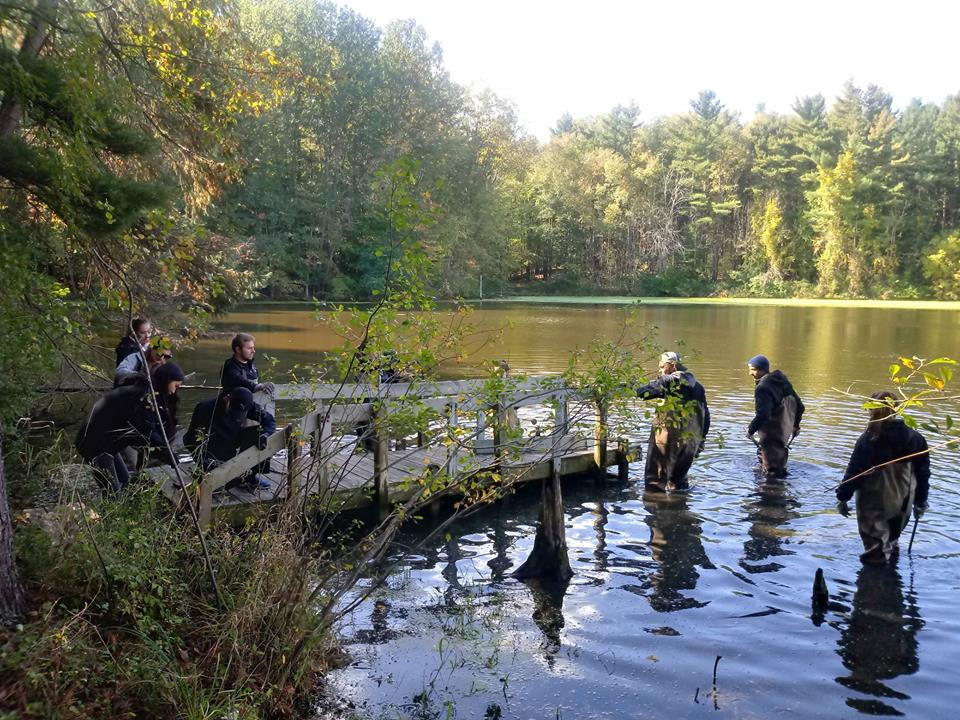 EWB MSU has a local project with the Woldumar Nature Center in Lansing. The chapter has volunteered with them several times in the past and we were proposed the opportunity to help them with docks they have onsite. The docks are used by the student and kid programs to sample water, learn about water quality, enjoy nature, and spot wildlife. The docks however, have become increasing unsafe as they are past their lifetime. The wood was rotting in several areas and the planks were bent. In fall 2018 a group of students demolished two of the three docks. The final dock will be demolished this spring and new ones will be bought and installed by EWB-MSU. Currently, the team is fundraising for installation, and completely design finalization. Follow this link to read more and see the project photos. 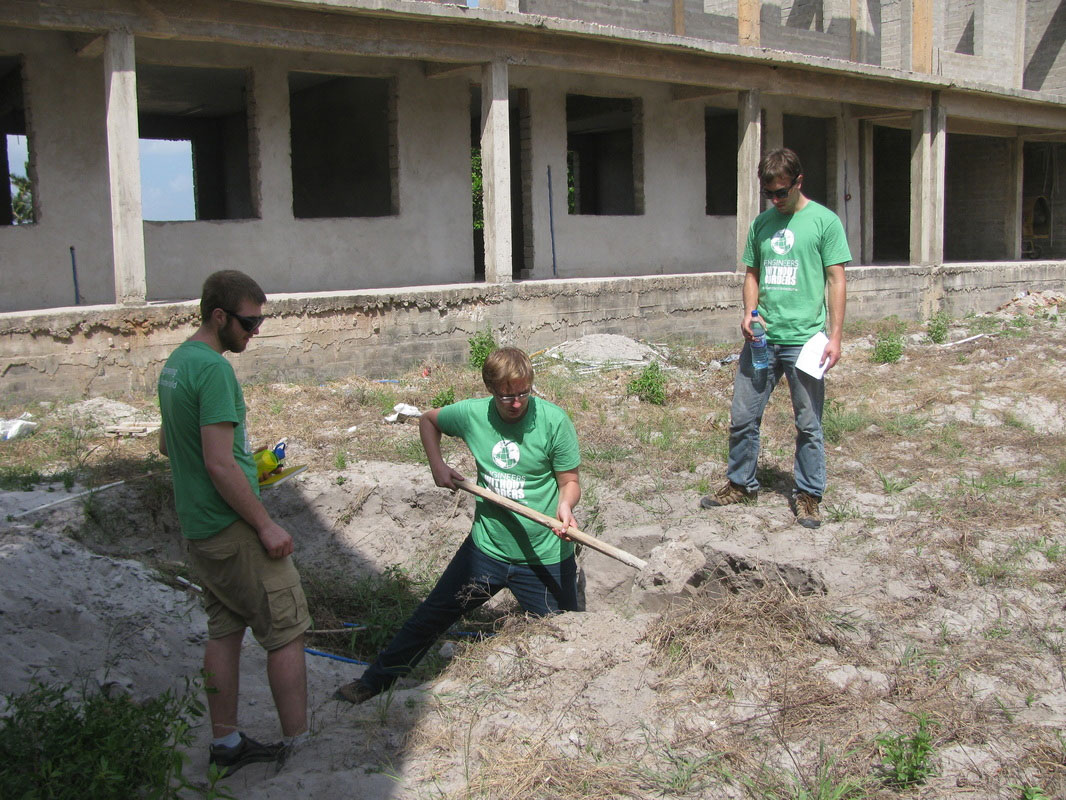 The MSU Engineers Without Borders travel team is currently in Tanzania continuing to implement the rainwater collection system. Follow their travels and progress on the EWB-MSU Tanzania Trip 2018 website.

January 2017, three MSU students, McKinley Brewer, Matt Benson, and Amanda Anguiano traveled to El Balsamar, El Salvador. They traveled with three Detroit Professionals, Esther Johnson, Vicky Persons, and Jack Babcock and stayed in the home of community members, Freddy and Veronica Recinossfar and their three children. Throughout their trip, the Engineers Without Borders team implemented three compositing latrines and taught the community about the importance of sanitation and the operation and maintenance of the latrines. With the help of the in country NGO, GAIA, EWB has implemented 30 composting latrines in the community since 2012. In January 2019, a final monitoring trip will take place to ensure the community is properly using and maintaining the latrines.

In August 2017, a group of MSU students and professional engineers will be traveling to Buyuni, Tanzania. During this trip, they will be implementing a rainwater collection system on an elementary school run by the Salvadorian Sisters. This is the first of three phases of this project. The following phases will include making the collected rainwater potable and then distributing it throughout the community.

A team of Michigan State University engineering students who are assisting in the building of a rainwater containment system at a school in Tanzania has received a $25,000 grant to support the work.

The funding comes from the 2015 Ford College Community Challenge and will assist the student group Engineers Without Borders at MSU with the project.

EWB-MSU is one of 10 student-led sustainability projects in this year’s $250,000 challenge. The Ford C3 grants are part of more than $1.7 million in new and ongoing global educational investments by the Ford Fund, which contributes more than $8 million annually in scholarships, grants and other initiatives.

Click here to read the full article on MSUToday.

Members of Spartans Without Borders (a sister organization to Engineers Without Borders) traveled to Dar es Salaam, Tanzania in August of 2014 to help implement a borehole well project.  The well is approximately 80 meters deep, and now provides fresh water to the surrounding community.

Students also spoke with schools and community groups about health and sanitation, surveying the community and introducing a device called a "tippy tap" that aids in handwashing.

Click here to read the full story by Patricia Mroczek.

Members of MSU’s chapter of Engineers Without Borders (EWB) rolled up their sleeves and dug into a construction project in Tennessee’s scenic Citico Creek Wilderness during the first week of March. Nine engineering students spent their "alternative spring break" building a new path on the Mill Branch Trail in Tennessee’s Cherokee National Forest. - See more at: http://www.egr.msu.edu/news/2014/03/17/alternative-spring-break-engineering-style

Members of MSU’s chapter of Engineers Without Borders (EWB) rolled up their sleeves and dug into a construction project in Tennessee’s scenic Citico Creek Wilderness during the first week of March.

Latrines that were constructed over winter break 2013 by GAIA, EWBs NGO partners in the El Balasmar community in El Salvador.

Over the summer of 2011, the Michigan State University Engineers Without Borders chapter received approval to work on a project in the community of El Balsamar, El Salvador. It is a poor community with approximately 600 residents (170 families), where the majority of incomes are supported by farming. Many El Balsamar families lack basic resources, including infrastructure and roads, clean water, and sanitation. The sanitation issues stem from a lack of human waste management facilities, which leads to the community being more susceptible to diseases and contamination of water sources in the region. One proposed project is to build 30-33 composting latrines throughout the community, targeting households with children of age five or less, and households near water sources.

The Michigan State University chapter conducted an assessment trip to El Balsamar from May 9 - May 15, 2012. The trip served as a way for our group to meet the community, to determine the feasibility of this project, and to gather information for the latrine design. With the conclusion of the assessment trip, it was determined that steps should be taken to implement our project design in the community. Our implementation trip is scheduled for March 2 -17, 2013.