Once again thank you for your interest in supporting engineering education, research and programs at Michigan State University. This section of the website outlines various gift opportunities and methods of giving available to you. We welcome you to explore these options and consider joining the College of Engineering's family of supporters.

The College of Engineering receives a great deal of its private support through annual donor campaigns, endowment funds, and special campaigns. In this section of the website you can explore the various annual donor campaigns (e.g. Corporate In-House Campaigns) as well as several special campaigns focused on new research facilities projects. You can also explore the opportunity to support or established endowed funds to benefit the College. Endowment gifts allow the College of Engineering to provide continual funding to a specific program or project. The principal of these gifts is invested and a portion of the annual earnings is used for annual program support. Endowment income can provide stable, long-term funding for faculty positions, scholarships, and program enhancement.

When the MSU Empower Extraordinary Campaign closed last year, the College of Engineering’s future was invigorated and enhanced by $114 million in campaign contributions and 22 new endowed faculty positions—more endowed positions than any other unit at MSU.

“MSU stretched to new heights in fundraising impact, and the college followed suit,” Engineering Dean Leo Kempel said. “The campaign helped us boost our numbers of endowed positions and honor some of the very best faculty at the institution by providing funding to continue their work and amplify their achievements. The work of endowed faculty members helps MSU remain competitive on a global scale,”  he added.

In all, MSU established 112 new endowed faculty positions – helping attract and retain outstanding faculty members. One of the newest endowed positions is the James and Kathleen Cornelius Chair and director for the Institute for Quantitative Health Science and Engineering (IQ). It is filled by health architect Christopher Contag. He joined MSU in 2017 as the founding director of IQ and the inaugural chair of the Department of Biomedical Engineering. He is also a professor in the Department of Microbiology and Molecular Genetics.

Other new endowed faculty positions in the college include:

The Keith and Michele Landau Endowed Professorship in Computer Science and Engineering, established to encourage the continued growth of computer science at MSU. The couple from Plano, Texas, created the fund to honor Keith’s parents, Merle and Nelma (Nicki), who spent their lives stressing the importance of education and hard work.

Landau received a bachelor’s degree in computer science in 1982. His almost 40-year career included work at Texas Instruments, Harris Corp., BNR/Nortel, Tekelec, and GENBAND. He holds two patents. A frequent guest lecturer and volunteer at MSU, he has served on engineering alumni and computer science advisory boards. He received the Computer Science and Engineering Distinguished Alumni Award in 2013.

Langeveld is a 1973 Honors College and bachelor’s degree graduate in mechanical engineering. He served as an officer with the National Oceanic and Atmospheric Administration, where his work on ocean surveys, oceanography and seismic work took him to the Gulf of Alaska and the Bering Sea. Later in his career, his interests included construction and real estate.

Thomas Wielenga funded the Wielenga Creative Engineering Endowed Professorship with a strong belief in the value of the creative process. He invested $1 million to kick-start the next teaching paradigm in the college. Wielenga was one of the developers of the mechanical simulation program, ADAMS, which is used extensively to simulate mechanical systems including cars and trucks. He also worked as a consultant and expert in the field of vehicle dynamics and accident reconstruction. Wielenga received a bachelor’s degree in mechanical engineering in 1978 from MSU.

A gift valued at more than  $1 million from former MSU Executive Vice President for Administration Satish Udpa and his wife, University Distinguished Professor Lalita Udpa, will support the education of engineering students.

Both are electrical and computer engineering professors at MSU and experts in the area of nondestructive evaluation.

Satish Udpa served as MSU’s acting president from January until the arrival of President Samuel L.  Stanley Jr., M.D, in August. Udpa is a University Distinguished Professor of Electrical and Computer Engineering and the former dean of the College of Engineering. He has returned to the engineering faculty. 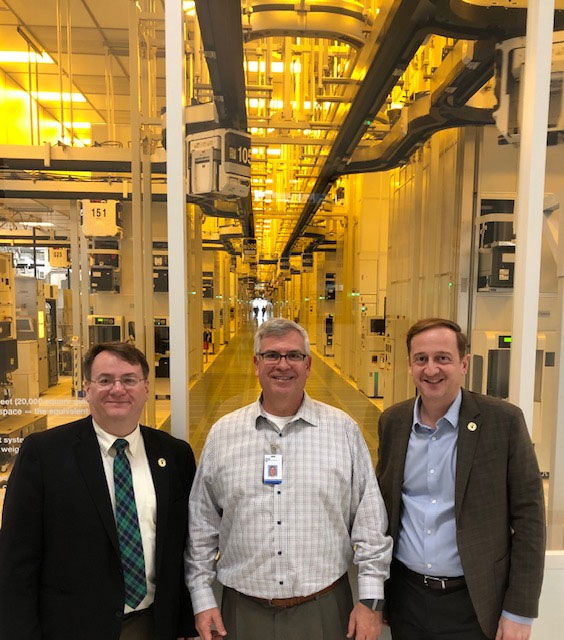 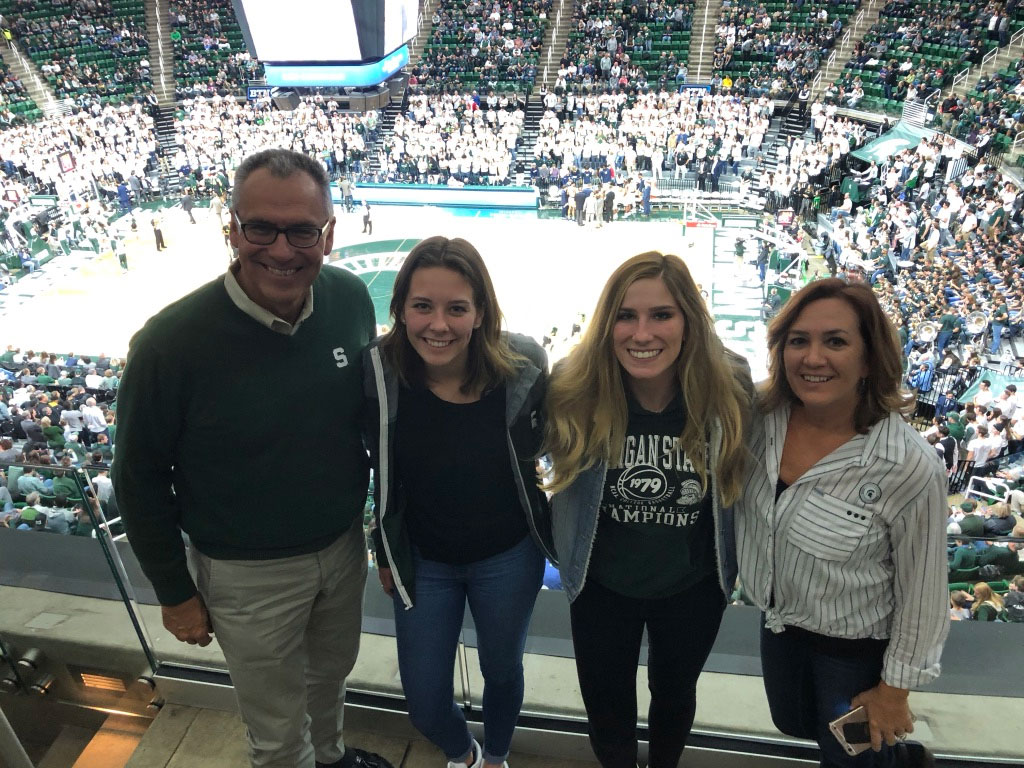 Brad and Dolores Kruchten scored a double-double in November 2019 – watching the Spartan men’s basketball team handily beat Charleston Southern while also enjoying time with this year’s Kruchten Scholars in the Breslin Center. Students Danielle Keusch (left center) and Rachel Emerick (right center) are both seniors in mechanical engineering. Brad Kruchten is a 1982 mechanical engineering graduate. Both Brad and Dolores retired last year from the Eastman Kodak Company, where they served in leadership roles. 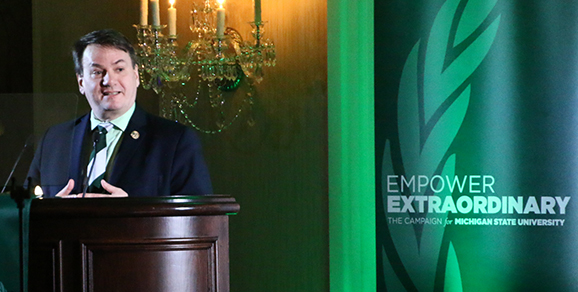 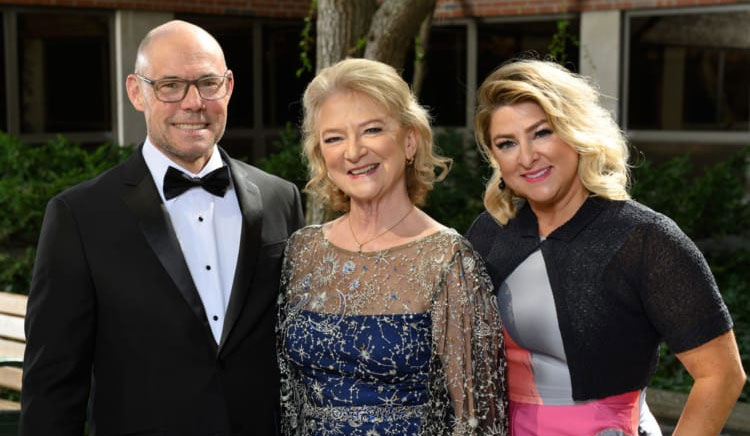 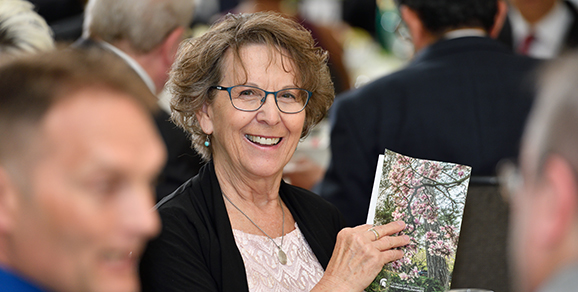