William A. Bradley, March 1986;  Susan J. Masten, October 2014 (with special appreciation to Mackenzie Davis for his research published as part of the department's 100th anniversary in 2009)

All historic photos below (11) are courtesy of Michigan State University Archives & Historical Collections.

The Civil Engineering Department was established in 1909.  However, it was very much a part of the school from its beginnings. The Agricultural College of the State of Michigan was created by the State Legislature in 1855  and in June of that year, a tract of 676.57 acres was purchased.  During the next 2 years, College Hall, [photo at left], Saints’ Rest Dormitory, [photo right below], and a brick barn were built, and the college welcomed its first students on May 13, 1857.

Four faculty members were hired; one of whom was Calvin Tracy, who was to teach mathematics and surveying. He was authorized to purchase a surveyor's compass and level "with the necessary equipment for surveying and leveling in the Agricultural College."

The 63 students attended classes in the mornings and worked three hours in the afternoon, felling trees, planting orchards, or hauling brick to build homes on Faculty Row, one of which (and the only one spared from demolition) was Cowles House, for the professors and their families and for some of the university’s first female students.

Rural and Civil Engineering was  one of the courses taken by seniors in the fixed curriculum. In 1861, T.C. Abbot, who later became the second president of the college, was appointed Professor of Rural and Civil Engineering, although his earlier and later designation was Professor of History and English Literature. In 1861, the college graduated its first class, but had no commencement, since the Civil War had started and six of the seven graduates had enlisted in a special company of engineers that was to serve under Major General John C. Frémont.

In his 1864 report, President Abbot recommended that a civil engineer be appointed to the Faculty of Instruction and in 1875, Mr. Rolla C. Carpenter an 1873 graduate of the college who also was a Civil Engineering graduate of Michigan University, was hired as instructor.  Thus, the department of Mathematics and Civil Engineering was founded. Carpenter’s first class in Civil Engineering used Wood's revision of Mahan's Elementary Treatise on Civil Engineering studying the chapters on materials, strength of materials, framing, masonry, roads, canals, rivers, and bridges. During his fifteen years at the college, Prof. Carpenter taught classes in Civil Engineering and Mathematics, while serving the college in numerous other ways. He surveyed the grounds, supervised the steam works and the carpenter shop, designed and supervised the construction of a dam on the Red Cedar river (designing his own pile driver), designed the new Mechanical laboratory, supervised the manufacture of 400,000 bricks, designed a new bath house for students (with 10 tubs - photo below, right), taught French, and, in 1884, served as the coach of the somewhat loosely organized college football team.

The Land Grant Act of 1862 had specified the teaching of "such branches of learning as are related to agriculture and the mechanic arts". Thus, in 1885, a two year course in Mechanic Arts was started.  This soon expanded into a 4 year Mechanical course, which later became Mechanical Engineering. The same year, the first engineering building, the Mechanical Building, was constructed. 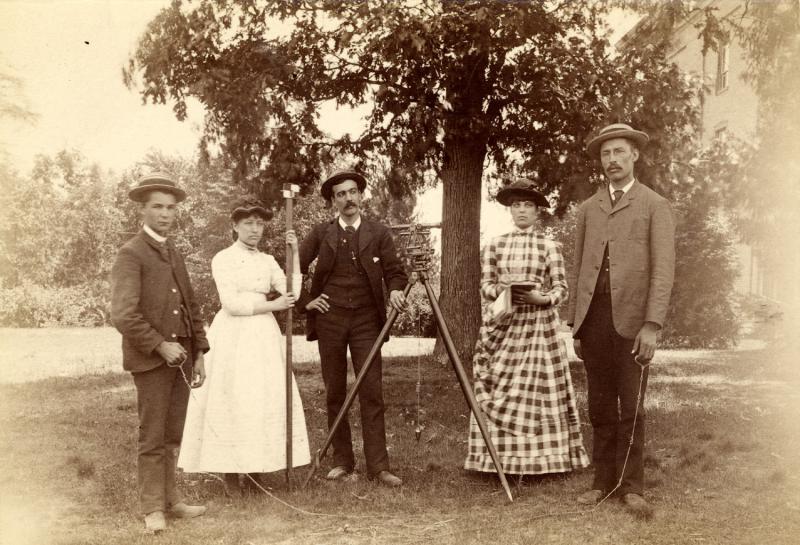 In 1892, the second Tau Beta Pi chapter in the nation was founded at the college.

Campus life during these early years was not always easy; East Lansing was just a small village. Travel to Lansing was nearly impossible in the spring and fall, when the roads became mires of mud and the streetcar that later connected the town and the college had not yet been built.

Until the 1890's, college was in session in the spring, summer and fall so that the students could practice agriculture at the college during the growing season.  Additionally, many of them depended on winter teaching jobs in the country schools for their expenses. When the academic calendar was changed to include winter classes, new problems were confronted.  Professor Vedder, in his 1897 report to the college president, wrote, "allow me to urge the early installation of sanitary conveniences at College Hall", the change in terms "requiring long class-work in winter months, make this necessary."

Since many of the engineering students planned for a Civil Engineering career, Professor Vedder, in 1901, expressed that "there is a demand for a course of study" allowing "specialization along Civil Engineering lines".  On December 4, 1901, the governing board of the college approved the new option and seventeen members of the junior class elected civil engineering. "Topographical drawing and sketching, shadows and perspective, railroad surveying, bridge analysis and design, masonry, arches and pavements" were added to the department curriculum.  On June 18, 1903, fourteen seniors became the first graduates from the Civil Engineering option.

During the early years of this new option, the faculty was overly busy. Prof. Vedder repeatedly protested about the crowded class and laboratory facilities. In 1907, a new Engineering Hall, costing $110,000, was constructed to house the departments of Mechanical Engineering, Mathematics, and Civil Engineering, Drawing and Design, and Physics and Electrical Engineering. The same year, Engineering's first Dean, G.W. Bissell, was appointed, and in 1908, the Division of Engineering was established.

By 1908, of the 232 engineering students who graduated in the years after the Civil option was founded, 117 had completed the civil engineering option. Professor Vedder proposed that in order to best serve the students, civil engineering should be a separate department and on July 7, 1909, the Department of Civil Engineering was born.

The department has continued to grow and evolve.  The first Master of Science degree was awarded on June 18, 1928 to Howard Allen.  His thesis topic was "The Design of a Reinforced Concrete Laboratory for the Department of Civil Engineering.  The CE program was first accredited in 1937 by the Engineers Council for Professional Development, which has become ABET.  An undergraduate curriculum in sanitary engineering was also offered, but discontinued in 1954 as it was believed that the programs did not offer sufficient breath. Almost sixty years later, In 2011, the B.S. Environmental Engineering program was approved by the State Board of Education.  The first environmental engineering student graduated in December 2011 and the program was accredited in August 2012. Graduate degrees in environmental engineering were first offered in 1980.

The civil and environmental engineering programs at MSU have always been student-focused, from 1900, when Professor Herman Klock Vedder expressed a need for a course of study "allowing for specialization along the Civil Engineering Lines" to today when student groups such as American Society of Civil Engineers (ASCE) Student Chapter, Chi Epsilon, and Environmental Engineering Society flourish, undergraduate and graduate students work together with faculty and postdoctoral assistants to solve complex problems, and students are encouraged to actively participate in the classroom.    The Student Chapter of the ASCE has been active at MSU since 1921.  Chi Epsilon, the National CE Honor Society was installed as chapter 42 in 1951 and the Environmental Engineering (Student) Society was founded as a chapter of the Air and Waste Management Association in 1988. The MSU chapter of Chi Epsilon has twice hosted the Chi Epsilon National Conclave,  in 1958 and in 1986. 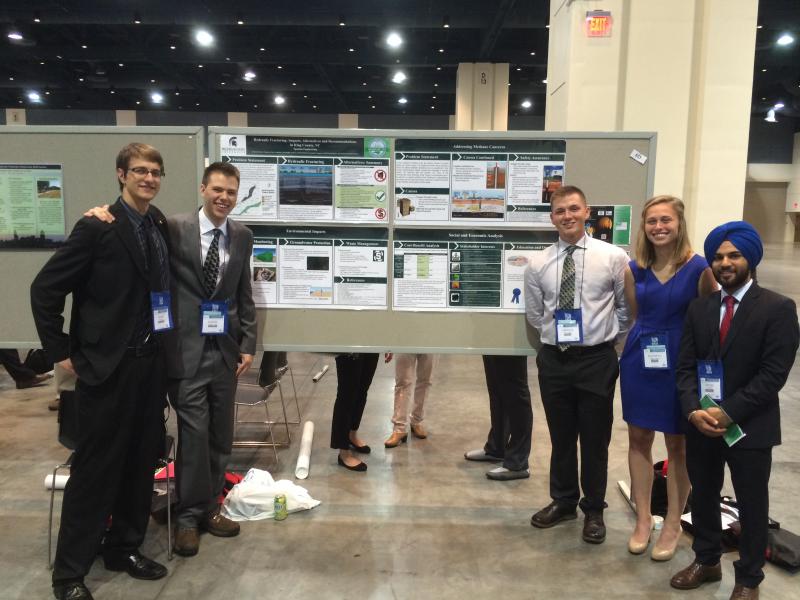 MSU Student Chapters have distinguished themselves as being first in a number of arenas.  The first ASCE sponsored National Concrete Canoe Competition was held in 1988 at MSU, with canoe races at Lake Lansing.  The first National Student Steel Bridge competition was held at MSU in 1992, and the Spartans became the first national champions.   MSU's concrete canoe team, the Rowing Stone, took first place in the National Concrete Canoe Competition in 1990 in Buffalo, NY.  The Environmental Engineering (Student) Society took first place at the Waste-Management Education and Research Consortium International Competitions in 1994 and 1995.  The EES team took first place at the Air and Waste Management Association sponsored Environmental Competition International (ECi) in 2015.

Not only on campus, but throughout the state and abroad, civil engineering has clearly left its mark. By far the greatest contribution of civil engineers along the banks of the Red Cedar has been in the education of thousands of men and women, who have obtained Bachelors, Masters, and Doctorate degrees, and have become involved throughout the world in the creation of engineering projects, the improvement of civil infrastructure and society, and in the education of our future generations of engineers and scientists. 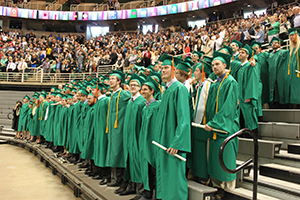